I randomly remembered this blog and was hit by a wave of nostalgia!

Is anyone else still here?

Echoes, into the void... 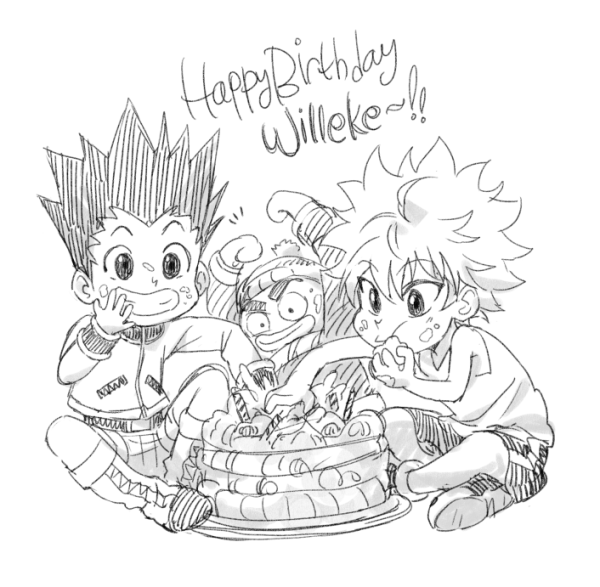 HxH! And Ajin! Ajin is a fun manga, more people should read it. It updates really slow, but as a HxH and Berserk fan, I have been well trained. Oh man, it's been forever since I properly drew these guys. I miss it ;_; and I need to get the muscle memory working again... Also, 2011 version is fun to draw in it's own flamboyant way, I look forward to trying that out more!

That aside, I'm super excited to be getting a bicycle! Some time last year I watched some Yowapeda, and ever since then I've been increasingly interested in bikes, which I haven't ridden since high school. And then Google introduced me to the concept of bicycle touring. Now I am obsessed with the concept of traveling on a bike, self sustained and free to roam, never looking back... (The more I feel constrained by the routine of my daily life in a cube, the more this type of lifestyle appeals to me, haha!)

(Actually I just remembered I had a Naruko sketch, and since that's vaguely relevant I'll dump it here!) 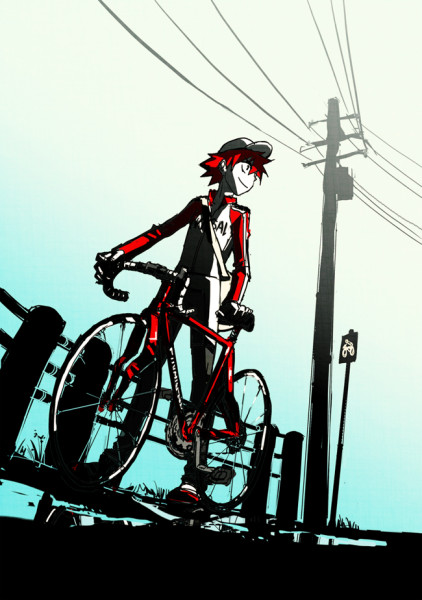 And so my friend and I went absolutely crazy and we each bought a Brompton. Yes, Brompton, that ridiculously expensive folding bike from England. It's the most expensive luxury item I've ever bought for myself (aka I don't exactly need it the way I needed a computer and a Cintiq, which are the only things I own that compete in price) so I felt incredibly nervous about making such a purchase and had deliberated on it for a very long time... but I know I didn't completely screw up because I still feel super excited after making the purchase (as opposed to those times where you're already having second doubts even as you hand over the card).

Anyway, we're both eagerly anticipating the day our shiny new bikes are done being built and arrive in the USA (ah, what a test of patience!! It's already been a month since we placed our order). I'm looking forward to commuting to work on it so it should be a good investment for casual use, even if I don't get to go traveling on it as extensively as I had hoped to do so this year, as I ended up exchanging my long awaited hiatus for an upcoming job... (heck, being able to commute by bike is one of the reasons why I ended up doing that, haha. I'm so ridiculous.)

Anyway, I should stop procrastinating now and get back to working on the stuff that'll pay off my bike. Motivation...!!

Helloo! It's been a while. A rather long while... over a year?! Wow, I honestly did not realize it's been that long. I suppose a lot of stuff has happened, but since my daily life is so repetitive, it's easy for me to feel like barely anything has happened all this time...!

I missed LJ, but felt rather bad about randomly disappearing on it (not that I was ever that active to begin with T_T ) and wasn't sure how to jump back in... but today I figured ah, I'll just do a post! I suppose it's better to hop back on here late than never.

With that said, is acceptable LJ etiquette to comment on Friends List posts that are a few days, weeks, or even months old? I want to catch up on things but I wonder if it's strange for people to be suddenly getting comments on their past entries out of the blue. I know the internet is wild territory with no real rules and all, but with the fast pace of twitter, facebook, and IMs, I feel like there's this unspoken "expiration date" thing after which it'd be awkward to comment on older journal posts...? ^^; 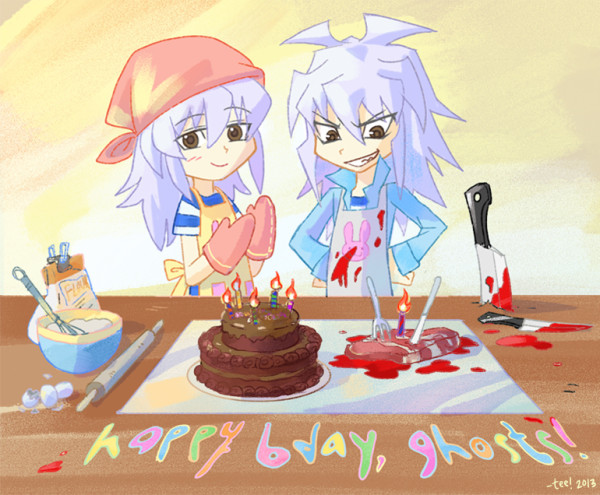 I have no idea how to bake from scratch either, so if I were put up to the task I'd probably end up offering something more like what Yami Bakura would come up with...

...At least he seems proud of his creation, though.

ghostghosts!! Hope you're having a great one!

Wow, a whole season passed so quickly. Shows are already airing from the new season and I was barely even able to take the time to look studios and new series up in advance like I usually try to. Not really watching much new stuff this season, yet, but here's my list...

Currently still keeping up with Hunter x Hunter, Blast of Tempest, Psycho-Pass, Senyuu (the only new show for me so far, and it's just shorts! haha).

I started out enjoying it for what it was-- just fanservice, or "tasty but empty junk food"-- but eventually the execution made it unenjoyable for me. Instead of simply saying I was disappointed with it, I'll try to explain why...
I think this show suffered from bad pacing and writing (among other things. One of them being that I don't feel like most of the characters really developed;  yes, some were explored a bit, but most did not necessarily display any growth). I think spreading one arc out over 13 or so episodes was a regretful decision, as it killed the pacing. It probably would have helped to follow the lead o Tsuritama-- the first 6 episodes with more lighthearted character moments to get you introduced and emotionally invested with the cast, and then in the last 7 episodes, building up a consistently rising tension for the action and climax and really pushing the previously established character developments to their next stages. In the latter half of Tsuritama, the stakes were constantly rising, and you could feel it in every part of the storytelling: the action and cuts were becoming faster paced, the environments and music were changing to accomodate the sense of urgency, etc... There was a complete story, with all manners of emotional highs and lows, in 12 episodes.
I was able to ignore this lack of real pacing in K when I first started watching, figuring it was supposed to be mindless fun, but by halfway through the show I was no longer able to ignore how it feels like they'd build tension, then drop it, then build, then drop-- but in a plateau, rather than an exponentially rising manner. It doesn't help that people literally stop and freeze midwar to stare at someone who shouted. Multiple times. (They're very well behaved gangsters, I guess.) And then following those awkward breaks, there would be a lot of talking and info-dumping.

An average "tension vs time in storytelling" graph, vs how K felt like to me...
With all the mixed reviews I heard about K, I'm honestly surprised it got a second season. Never a bad thing-- I'm always happy for the industry when something is successful enough to keep studios in business-- I just hope the writing and characterizations get some improvement. And, that concludes my 2 cents.

Speaking of how the industry is doing, even in the wake of crazy terrorism, I'm glad Kuroko no Basuke got greenlit for a second season!

Twitter is currently doing this weird thing where it redirects to another site (Aintitcoolnews? Seems innocent enough, at least it's not anything explicit or, to my knowledge, harmful.) I don't know why my internet sometimes does this. I use my landlord's internet, so I have no idea how to check if someone uninvited is bumming off the internet and doing weird stuff on it. Anyway, as usual it'll just... fix itself eventually. With that said, I should probably take more care with that, and I'll just post this youtube thing here instead of twitter (it's been a while since my last nerdy post, anyway!):

Hiroaki Samura, mangaka of Blade of the Immortal, drawing!
Really nice to finally see his process, as his pencilwork is gorgeous and I remember being introduced to his works many, many years ago (way before the minimum age I should have been before being exposed to it, haha!)
Sad to know that the manga will be ending relatively soon, but he gave us a lot of really fantastic volumes along the way-- especially the four man watch tower assault and, yes, that epic horse fight.

Woah, and upon finishing typing this entry, Twitter is now back to normal.
What.

Agh, it's been a while! So here, have some terribly incoherent train of thought rambles (warning for mild and vague spoilers throughout?):

I like to draw athletes/sports/martial arts people, so Skater-kun is fun to draw!
...Aaand I think that sums up my rambling about anime for now. As for life? It's the usual... except that it's more stressful. Been sleeping terribly as of late. Not much that I can talk about except for some first world problems I guess, so it's not really worth mentioning. (｡｡ヾ);;

Also, I heard DC Nation (Young Justice and Green Lantern specifically) are going on yet another three month hiatus, after only two weeks? And not even the show creators knew about that surprise hiatus. Seriously, Cartoon Network...

According to LJ, it's 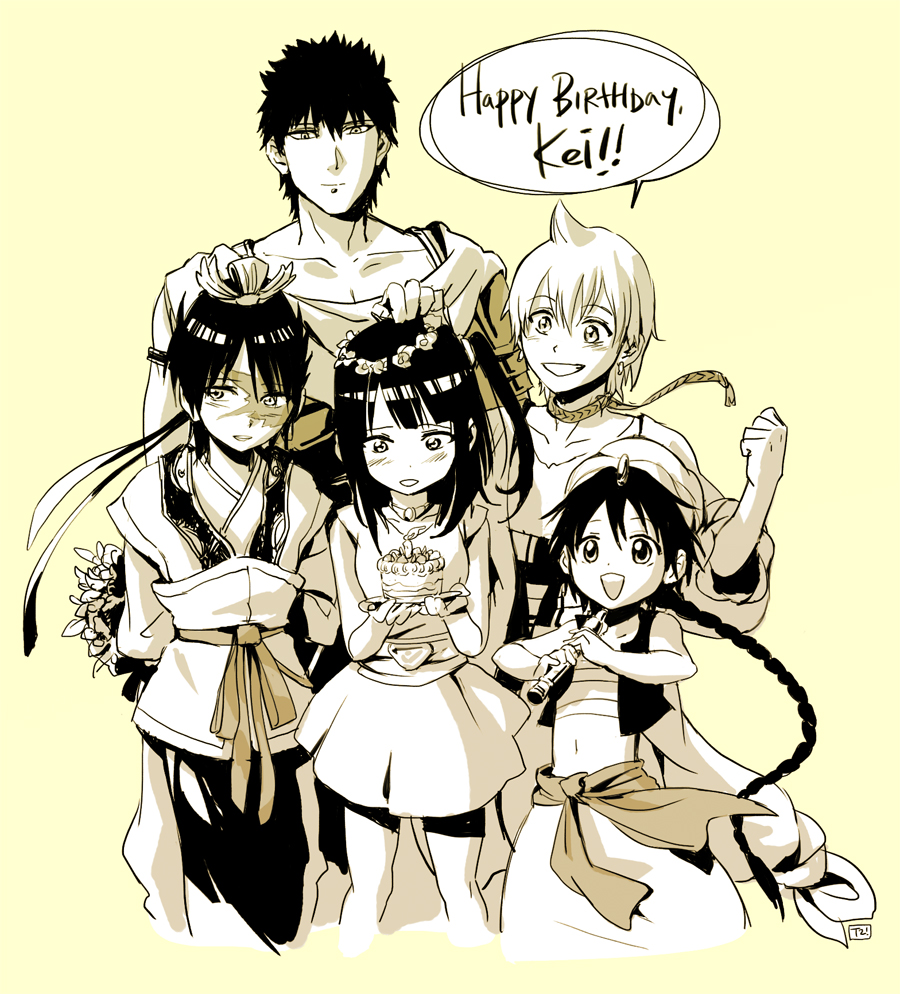 You mentioned  ("casually!") liking Mor/Alibaba and also Mor/Hakuryuu, so I started drawing them both... and just ended up with group love. Nakamaship~!

Hope you have a great birthday, surrounded by friends and family, and with great cake! 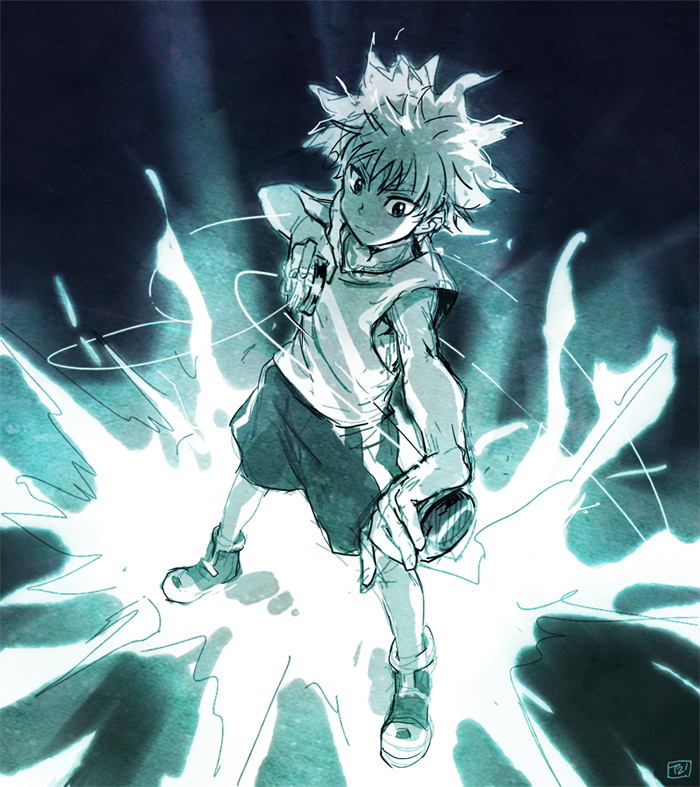 Actually had this sketch lying around for forever (no seriously, forever, the sketch is from over a year ago), so decided to fix it up real quick and just get it over with!

Anyway, this past week has been hellishly busy (and it's not over yet!) but last night was an interesting change of pace-- first art class I've been able to take in a while (composition), and it was refreshing and fun~ It's such a small world, too. Ends up three people in that class were people I've bumped into at some point in time within the past few years.

The ending song to Shin Sekai Yori is so catchy. (The animation [by Shingo Yamashita] is wonderful as well-- I'll link it when I find an upload on YT.) I'm excited for the full version of the song whenever that comes out, but for now, the single version loops rather seamlessly!

I think this season, SSY may very well turn out be my most anticipated show, as I really enjoy the directing style so far-- understatement is a device that's not so often used in series these days (ie. Hunter x Hunter 1999 vs 2011), and I like that SSY has a lot of subtle acting and atmospheric pacing. I also like the pacing of information; they put in just enough to keep the audience guessing, giving them some credit and room to think. The mystery keeps you on your toes, and it's a refreshingly slow crawling kind to start with! Hope the series keeps it up.

Anyway, a bunch of new series coming out within the next few days-- I'm excited! :D
Collapse